Ethan Lewis Maltby is a British composer based in Canterbury, Kent. His music has been performed all over the world in cinemas, stadiums and theatres.​

In 2004 Maltby created, composed and directed Noise Ensemble, a percussion show which toured all over the world from 2006 – 2011. This spectacular show has played extensively in UK theatres and venues including The South Bank Centre, Wembley Stadium and on BBC TV’s Blue Peter. In 2011, his new theatrical percussion show DrumChasers toured UK theatres with narration by Stephen Fry, receiving rave reviews.

In 2016, Maltby's musical The Battle of Boat was premiered by the National Youth Music Theatre in London, a full cast recording is available and the show been published by Theatrical Rights Worldwide and received many productions across the world.

Outside of theatre, Maltby has scored various films, animations and adverts covering many different genres. He has collaborated with acclaimed Spanish filmmaker Jesús Monllaó on several projects, most recently scoring the multi award-winning feature film Son Of Cain. He has also composed the score for major sporting events for the NFL, UEFA and several FA Cup Final Opening Ceremonies – his track FA Overture, has been used as the players walk-on anthem for many major FA games. 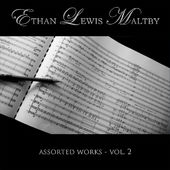